Location: Alcott Street, south side of street, .25 miles from intersection with Concord Road 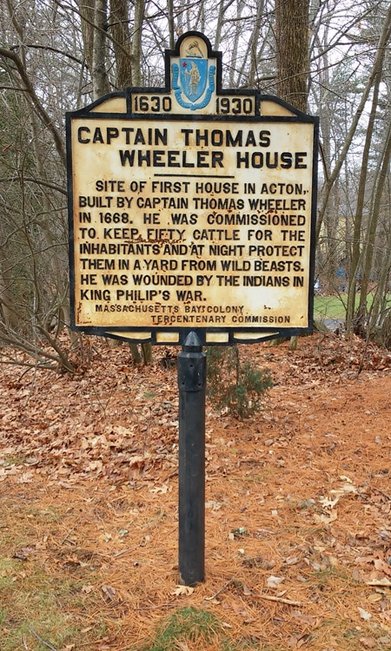 According to Shattuck's history of Concord, in 1668, Thomas Wheeler leased 260 acres from the town of Concord on the condition that he keep and protect cattle for the good of the inhabitants, and he also agreed to build a shingled house with chimneys and a barn.  He apparently built a grist-mill, the first in Acton.  In 1675, with the rank of Captain, he was sent to Brookfield with his company to protect Captain Edward Hutchinson as he tried to negotiate a treaty with the Native Americans there.  In the confrontation that followed, Wheeler was shot and was rescued by his son (who was also shot).  He wrote a memoir of the Brookfield expedition that is available online and has been used in various later sources. Captain Thomas Wheeler died on December 10, 1976 according to Concord's vital records.