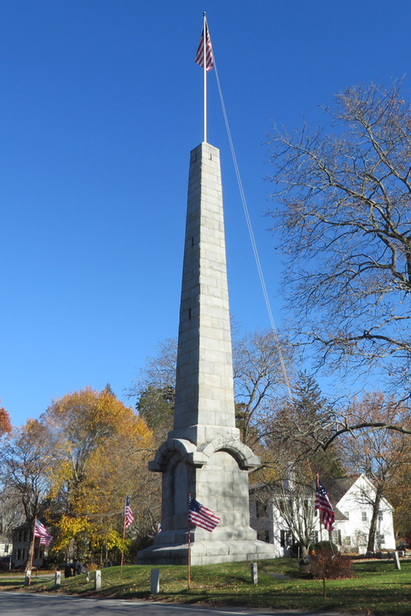 This 75' stone monument was erected in 1851 in memory of Acton's citizen soldiers who lost their lives on April 19, 1775.  The remains of Captain Isaac Davis, James Hayward and Abner Hosmer were removed from what is now Woodlawn Cemetery and placed in the base of this monument in 1851.

The monument was built out of granite quarried from Acton, most taken from the land nearby where Rev. Woodbury, who was instrumental in getting the funds for the monument, lived.  The Commonwealth of Massachusetts supplied $2,000 toward the monument's construction, and the town of Acton provided $500.
The cornerstone was laid on August 20, 1851 with a ceremony involving two ministers and a large choir.  When the monument was completed, a dedication ceremony was held on October 29, 1851.  Many people from surrounding towns were present.  After a procession to move the remains of the three who had fallen on April 19, 1775 from the cemetery to Acton Center, speeches were given (including one by Governor Boutwell) and a meal was provided for over a thousand guests under a large tent.