Location: Concord Road, north side of street at approximately number 96
In 1950, Ernest E. Wetherbee, who was born in East Acton, donated funds to the town of Acton for a memorial entrance in honor of his wife Harriet.   The plaque on the right side of the gate reads:  IN MEMORY OF HARRIET PICKARD WETHERBEE.  On the left side of the gate, a matching plaque says: FOUNDED 1738 WOODLAWN CEMETERY ACTON.

Harriet Haynes Pickard was born January 5, 1877 in Littleton, MA to Cyrus P. and Frances A. (Haynes) Pickard.  She graduated from Littleton High School and Framingham Normal School.  She was a teacher in 1898 when she married Ernest Elwood Wetherbee, a merchant living in Putney, Georgia.  She had five children, including infant twin sons at the time of the 1910 census.  At some point during that year, the family moved to Acton because of her failing health.  She died of tubercolosis on January 12, 1911 in Acton and was buried in Woodlawn Cemetery with one of her twin sons and with Ernest's parents.  Her parents' stone is nearby.

Ernest Elwood Wetherbee was born in Acton September 26, 1869 to Daniel James and Augusta (Putney) Wetherbee.  He and his brother James Roland moved to Georgia to work in their Uncle Frank Putney's business.  Ernest and his children spent some time in the north around the time of Harriet's death, but eventually, he was settled again in Albany, Georgia.  He remarried in 1931 to Claire (Wooten) Mills and became president of the Flint River Cotton Mills.  He lived until 1970 and was buried in Albany, Georgia. 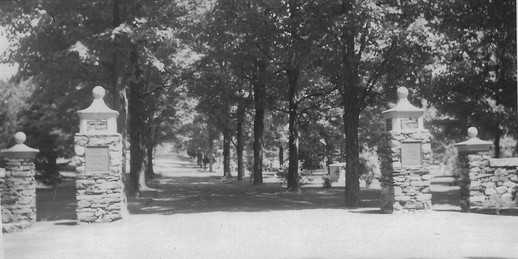 Harriet (Pickard) Wetherbee entrance, taken not long after construction
Inside the cemetery, where Harriet was buried: