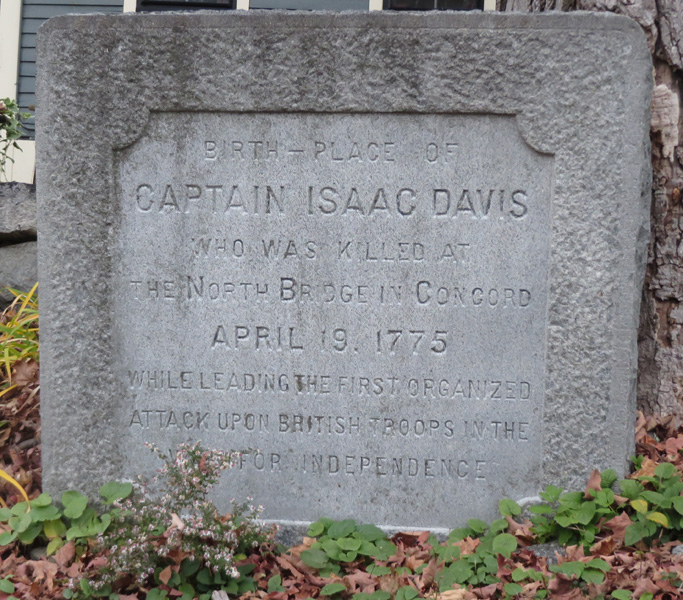 This stone commemorates the birthplace of Isaac Davis, Captain of the Acton Minutemen who was killed April 19, 1775 at the battle of the North Bridge in Concord.  The actual house in which he was born became part of the circa 1835 house in front of which the marker was placed.  According to the stone, Susan Haskell (Davis) Wright, a grand-niece of Isaac Davis, was responsible for erecting the marker in 1900, although in contemporary newspaper reports, her husband George C. Wright is the one mentioned.  Mr. Wright was a well-known benefactor in Acton; he provided funds for the Mount Hope Chapel and much of the cost of building the West Acton Universalist Church.

According to West Acton news in the Concord Enterprise, 27 September and 4 October 1900 (both page 8), the society of the Sons of the American Revolution met in Acton on September 26, 1900 to honor Acton's historic landmarks and  "to unveil the monument recently erected at the birthplace of Capt. Isaac Davis."  George C. Wright hosted a luncheon for the attendees.

The front of the stone says:
BIRTH-PLACE OF
CAPTAIN ISAAC DAVIS
WHO WAS KILLED AT
THE NORTH BRIDGE IN CONCORD
APRIL 19, 1775
WHILE LEADING THE FIRST ORGANIZED
ATTACK UPON BRITISH TROoPS IN THE
WAR FOR INDEPENDENCE

The side of the stone says:
ERECTED BY
MRS. GEO. C. WRIGHT
A GRAND-NIECE OF CAPT. DAVIS
DEDICATED SEPT 26 1890
BY MASSACHUSETTS SAR 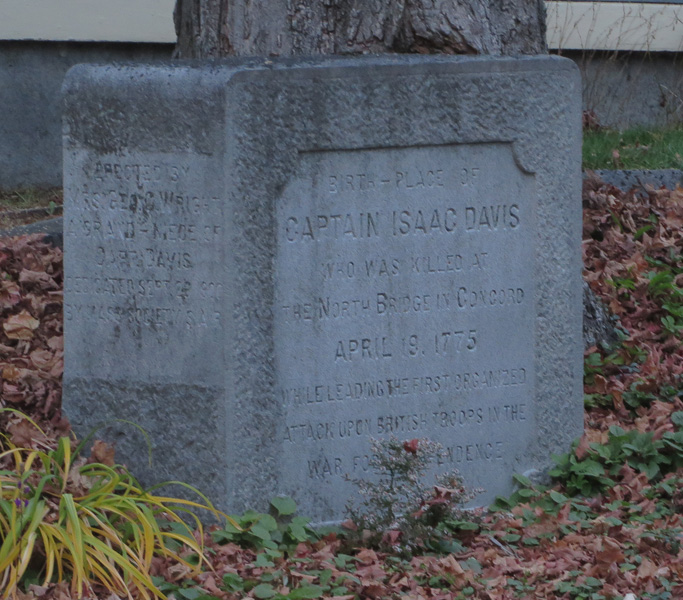