Location: Acton Town Green, at the foot of the Davis Monument, across from Town Hall (on the Main Street side of the Monument) 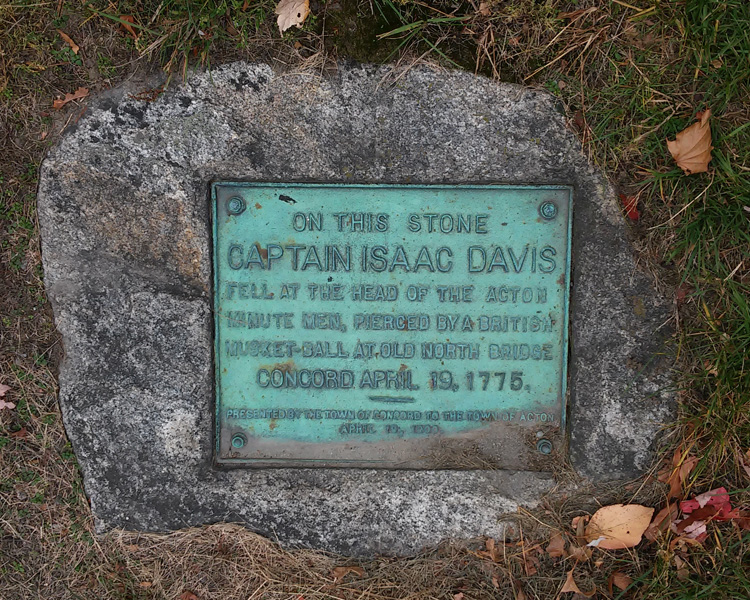 The plaque on the stone reads:
ON THIS STONE CAPTAIN ISAAC DAVIS FELL AT THE HEAD OF THE ACTON MINUTE MEN, PIERCED BY A BRITISH MUSKET-BALL AT THE OLD NORTH BRIDGE CONCORD APRIL 19, 1775.
PRESENTED BY THE TOWN OF CONCORD TO THE TOWN OF ACTON APRIL 19, 1900

According to Joel Bohy's article "On This Stone Captain Davis Fell," by 1878, tradition in the town of Concord said that Isaac Davis had fallen upon this stone.  The stone was discovered during bridge reconstruction in the 1870s and moved to the nearby Bullet Hole House where it stayed for a number of years.  Bohy's research indicated that no first-hand testimony mentioned the stone.  Early 19th century depositions did not mention it either.  It first appeared in records, evidently, in a now-missing deposition of David Buttrick, son of a man worked on the removal and rebuilding of the Old North Bridge in the 1790s.  It was David Buttrick, who, based on his memory of his father's description of the stone, identified the stone as a "Revolutionary Relic."

The Town of Concord eventually gifted the stone to Acton.  Acton's Annual Report for the Year Ending March 12, 1901 shows:

Proceedings of the Meeting Held August 21, 1900 (page 11):
Article 6: "Voted, That the Selectmen with Luther Conant and Augustine Hosmer, be a Committee to provide a proper resting place for the stone presented to this Town by the Town of Concord, and cause a suitable inscription to be placed upon it."