Location: At the base of the Davis Monument on Acton Town Common, Main Street, on the side opposite the Town Hall 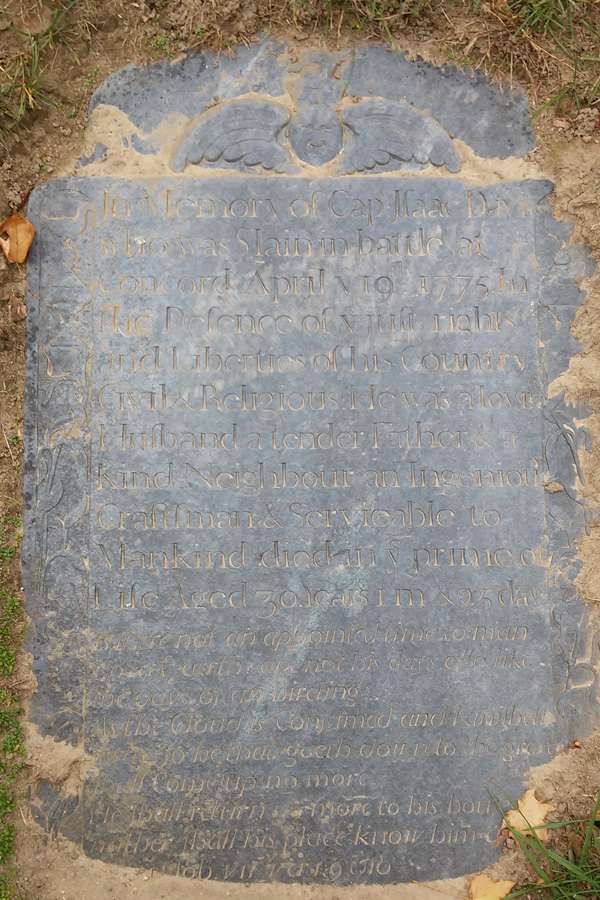 In Memory of Capt Isaac Davis who was Slain in battle at Concord April ye 19th 1775 In the Defence of ye just rights and liberties of his Country Civil & Religious.  He was a loving Husband a tender Father & a kind Neighbour an Ingenious Craftsman & Serviceable to Mankind died in ye prime of Life Aged 30 Years 1 m & 25 days
Is there not an appointed time to man upon ye earth? are not his days also like the days of an hireling?
As the Cloud is Consumed and vanisheth away so he that goeth down to the grave shall Come up no more.
He shall return no more to his house neither shall his place know him [any more?]
Job VII [vers? 1 9 &?10]

The italicized verses are from the King James version of the Bible, Book of Job, Chapter 7, verses 1 and 9-10.

This gravestone marked Captain Isaac Davis's grave in what is now Woodlawn Cemetery until the erection of the granite memorial monument on the town common in 1851.  The remains of Isaac Davis (as well as James Hayward and Abner Hosmer) were moved to Acton center into, as expressed in Phalen's Acton history, "a niche prepared.. in the eternal stone of the monument."  The old tombstones were set on the ground around the monument.