Location of Sign:  Carlisle Road, just before the the Carlisle town line. (Exact location of original house or houses unclear.) 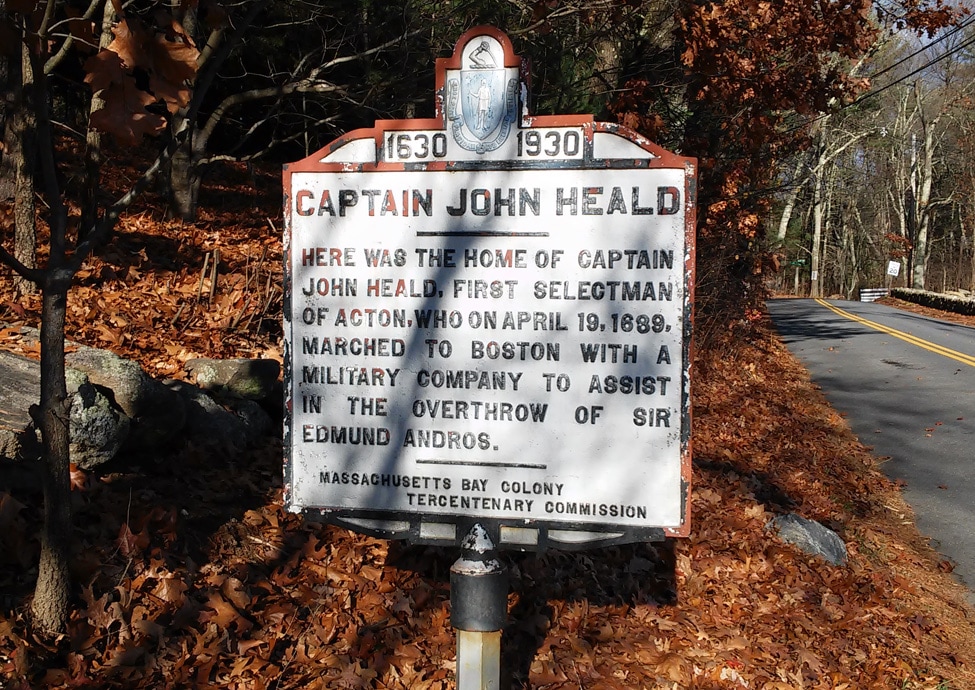 The sign reads:
1630   1930
CAPTAIN JOHN HEALD
HERE WAS THE HOME OF CAPTAIN JOHN HEALD, FIRST SELECTMAN OF ACTON, WHO ON APRIL 19, 1689, MARCHED TO BOSTON WITH A MILITARY COMPANY TO ASSIST IN THE OVERTHROW OF SIR EDMUND ANDROS.
MASSACHUSETTS BAY COLONY TERCENTENARY COMMISSION

The information given on this marker has perpetuated confusion about the identity and home of John Heald, Acton's first selectman.  Several generations of John Healds lived in this area, and some written sources seem to have merged them. However, it seems clear from town records that John Heald, Acton's first chosen selectman and a deacon of its first church, lived from 1693-1775.  Commonly referred to as "Deacon John Heald," he apparently farmed at or near the site commemorated on the 1930 marker.  We can say with confidence that the John Heald who led the Concord Military Company to Boston in April, 1689 was not the same person as this Deacon John Heald.  As is made clear by a grave marker in North Acton's Forest cemetery,  Deacon John Heald (the first selectman) died in 1775 in his 82nd year, a lifespan that would not have allowed him to participate in the Andros rebellion.

The confusion about the various John Healds and their home sites is multiplied by the fact that town boundaries changed.  Researching Heald properties in the area involves land that was originally in Concord and Chelmsford and then in Acton and Carlisle after separate towns were split off.  While Phalen's Acton history says that according to a 1779 map at the Massachusetts state archives, when Carlisle was split off, the Deacon John Heald home site remained within the borders of Acton, a few yards from the Carlisle line, Carlisle historians have placed his house in Carlisle just east of the town line, at 566 Acton Street.

Turning to the John Heald who led the Concord Military Company to Boston in April, 1689, Shattuck's History of Concord and Lapham's and Wilkins' histories of Carlisle indicate that it was Lieutenant John Heald, Deacon John's father.  He was married to Mary Chandler and served as a selectman of Concord in the 1711-1715 period.  Apparently he owned and farmed land in the vicinity of the 1930 marker, but it is unclear that the site was ever his "home."  The question seems to have arisen because of a deed.  In 1715, John Heald deeded to his son John eighty acres of upland, swamp and meadow, including all buildings, timber, grass and herbage for his "Comfortable Settlement not far from me."   That statement has led historians to believe that the father was living somewhere near the Deacon John Heald home site (around the location of the sign) at the time.  However, "not far from me" in 1715 may not have meant "nearby" in twenty-first century sense.  Lieutenant John's 1722 probate record describes the dower rights of his widow Mary; land was set off near their dwelling house with boundaries that seem to indicate that they were living (as they had earlier) on today's South Street in Carlisle.  The gifted land, by contrast, was apparently part of a purchase by Lieutenant John Heald from James Blood (of land formerly belonging to his father Robert Blood) in 1709.  Several histories mention that the gift included an unfinished house; presumably this was a family tradition, because the deed does not make that clear.

For more information (and various interpretations of the extant documents) see: