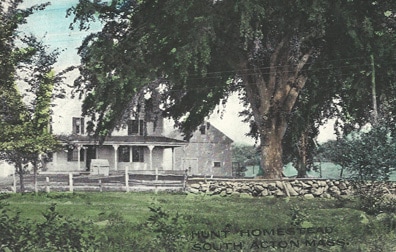 Simon Hunt House & Liberty Tree 1912
In August 1899, bronze markers were placed by the Bunker Hill Historical Society on the Simon Hunt house and the tree, respectively saying "The Hunt House 1735 to 1821" and "Liberty Tree 1776."

The house was built in 1715 by Henry Sparks and bought by the Hunt family of Concord in 1727.  The house was sometimes rented until 1755 when Simon Hunt, Junior (1734-1820, son of Simon Hunt and May Merriam) bought the house to live in.  Simon Hunt Jr. was a 1st Lieutenant in Captain Faulkner's west company militia and, after organizing the company at Major Francis Faulkners' homestead, led them to the battle at Concord on April 19, 1775.  He also commanded a company on Dorchester Heights March 4-10, 1776 at the time of the British evacuation of Boston.  Simon Hunt Jr. was a Deacon of the first church in Acton and was a representative to the legislature in 1780.

An elm in the south yard of the house, probably planted by the builder Henry Sparks, was chosen as Acton's Liberty Tree during the Revolutionary years.  (Boston's famous Liberty Tree was presumably the inspiration.)  In 1915, due to concern about the lifespan of the tree, Reuben L. Reed and all eight grades of South Acton schoolchildren planted a 4-foot maple to serve as the Liberty Tree's replacement if necessary.  They called this the Peace Tree. The Liberty Tree died around 1925.  The Peace Tree is still standing and is marked by a very worn sign that says:
It is not clear what happened to the bronze markers that were on the house and the original elm.  If anyone knows, please contact us.

Jenks Library, Acton Historical Society, has other materials on the Simon Hunt House.

Weathered sign on the 1915 Peace Tree next to the Simon Hunt Homestead.