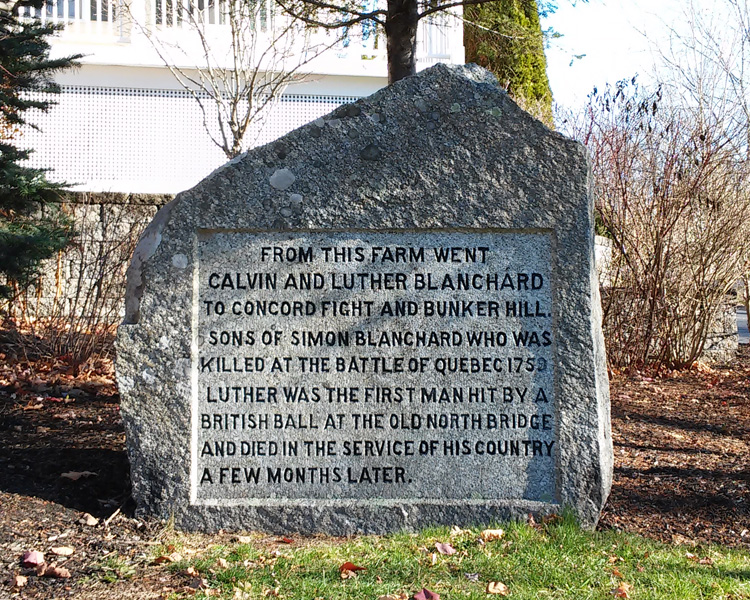 The memorial stone reads:
FROM THIS FARM WENT CALVIN AND LUTHER BLANCHARD TO CONCORD FIGHT AND BUNKER HILL.  SONS OF SIMON BLANCHARD WHO WAS KILLED AT THE BATTLE OF QUEBEC 1759. LUTHER WAS THE FIRST MAN HIT BY A BRITISH BALL AT THE OLD NORTH BRIDGE AND DIED IN THE SERVICE OF HIS COUNTRY A FEW MONTHS LATER.

On the back of the stone:
ERECTED 1895 BY LUKE BLANCHARD GRANDSON OF CALVIN 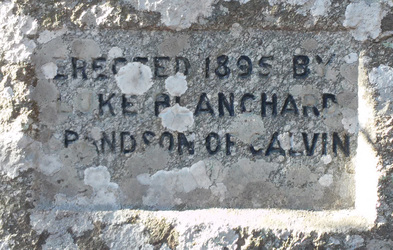 Luke Blanchard  was born in a part of Littleton that later became Boxborough.  He and his brother were living at the home of Abner Hosmer 's father and learning his trade at the time of the Concord battle.  The brothers and Abner Hosmer left from the Hosmer farm whose location is marked by the stone.  Luther Blanchard served as fifer for Isaac Davis' Company and was the first hit at the battle of the North Bridge in Concord.  He did not think his wound serious at first, but eventually died from its effects.  (There is some confusion about when exactly he died.)  Calvin also served at the Battle of Bunker Hill and in Quebec.  A stone across the street commemorates the location of Deacon Jonathan Hosmer's home where the Blanchard brothers were living as apprentices.