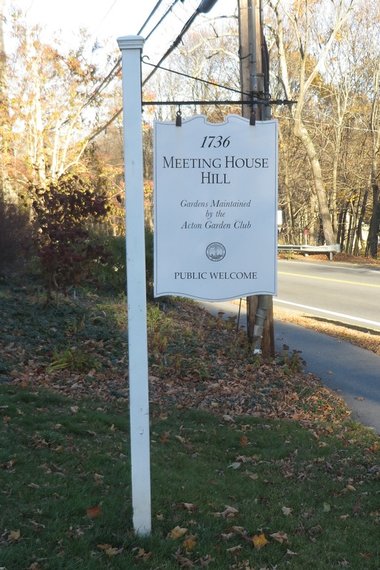 This sign marks the site of the first meeting house in Acton, now public open space maintained by the Acton Garden Club.

After Acton was incorporated as a separate town in July 1735, the citizens met several times to negotiate the location of a new meeting house.  A deed for the land was dated January 25, 1737, and later that year, the meeting-house was framed.  The first public worship at the new meeting house was held in January, 1738, but according to Fletcher, it wasn't until 1747 that the meeting house was actually "completed."  (Renovations and pew reconfigurations continued.)

The meeting house not only was the town's worship space, but it was also where the town's decisions were made upon such items as schools, roads, roaming livestock, the needs of the poor, and eventually, Revolutionary activities and military matters.   The first meeting house was used for town meetings until May 1, 1809.  It was torn down a few years later.  After much contentious debate, many votes, and re-votes, a second meeting house was built on the site of the current Town Hall.  Meeting House Hill was became the site of the Acton Centre school and its replacement school house.

After the Acton Centre school was torn down in the early 1960s, rubble was left behind, soon followed by weeds, shrubs and poison ivy.  In the winter of 1964-65, the Acton Garden Club received a civic beautification grant from Sears Roebuck & Company and the Garden Federation of Massachusetts that was the beginning of their project to clear the site and create a public park on the 1.75 acres of land.  Community members and groups contributed to the effort, and the town brought in loam and seed.  Over the years, the Garden Club has planted trees, shrubs, bulbs and wildflowers.  With the town of Acton's Municipal Properties, the Garden Club continues to maintain the property for the enjoyment of the public.

The stepping stone from the original meeting house is at the top of the hill.