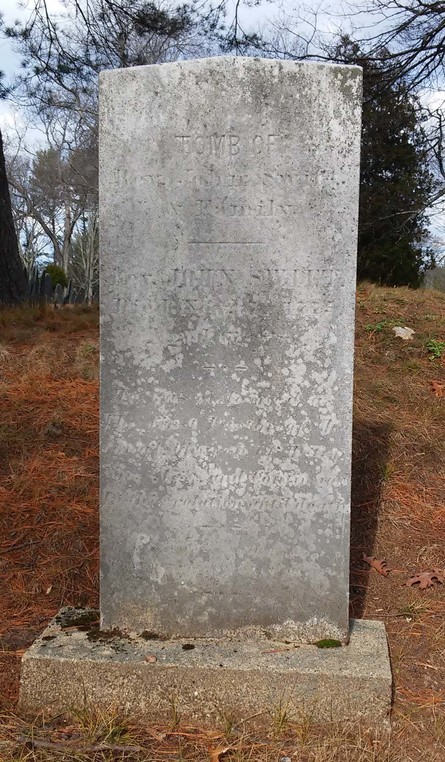 According to Fletcher's 1890 Acton in History, the stone read:  "Rev. John Swift died November 7, 1775, aged 62 years.  He was ordained as the first pastor of the Congregational Church of Acton, November 8, 1738, and continued in this relation until death.  He was a plain, practical and serious preacher and a faithful minister." 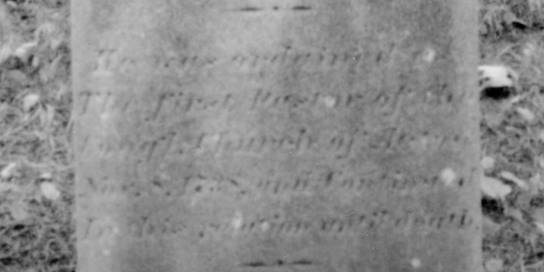 Picture taken in the mid-1990s by M. Shepard - this section was more legible at that time.
John Swift was born in Framingham, Massachusetts in 1713 to Reverend John Swift,  who was Framingham's first minister.  John (Jr.) graduated from Harvard in 1733.  In May, 1738, the town of Acton invited him to become their minister.  He was ordained on November 8, 1738 and married Abigail Adams of Medway in 1740.  He served as Acton's minister until his death on November 7, 1775 from smallpox.

Fletcher relates the story that Reverend Smith "waved his benedictions over" the Isaac Davis Company on its way to Concord on April 19, 1775.  It was Reverend Swift who preached the sermon at the funeral for Isaac Davis, James Hayward, and Abner Hosmer who were killed in the Concord battle.    According to an article in the Concord Enterprise in 1913, Rev. Swift also worked with soldiers in camp at Cambridge before his death.  No other sources have been found to verify that information.

This grave site is described in Fletcher (page 245): "A mound and a simple marble slab mark his grave.  Four pine trees of stately growth sing their requiem over his precious dust as the years come and go.  All honor to the dear memory of him who laid the foundation stones of this goodly church of Acton, and did so much to form the peaceful, frugal character of its inhabitants."  Today, there are three pine trees marking the mound.

Evidently, the marble slab was erected in 1877.  The Acton Historical Society has an program in its collection that shows that exercises were held at the tomb of Rev. John Swift on Decoration Day, May 30, 1877 "on the occasion of the erection of a tablet to mark his resting place."