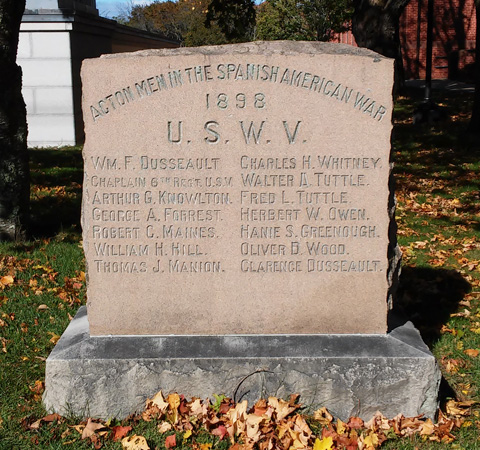 This stone was erected in 1912 by the town of Acton.  The town report for the year ending 1 February 1913 showed payments to Julian Tuttle for the foundation ($15) and to D. C. Harris for the monument stone ($200).  There were also expenses for the dedication ceremony and luncheon.

The August 21, 1912 Concord Enterprise reported the installation of the red granite stone on "the little triangular piece of the common facing the monument."  An October 16 article about the dedication ceremony held on 12 October 1912 included a transcription of the address given by Reverend F. P Wood.  The Acton News of March 28, 1913 reported that at the monument's location (before it was moved) "it will be eventually shaded by a tree which was set in commemoration of the treaty by which the Spanish-American war was brought to a close."

Note that William G. Rodway, an Acton resident who joined a Boston regiment and died of disease while in service, was omitted from the listing.  A blog post gives further information about him.  Others who were considered "of this place" in 1898 were "Aleck Losaw and a young man whose correct name is not learned, a farm hand at J. Coffey's." (Concord Enterprise, 3 November 1898, page 5).  The 22 December 1898 Concord Enterprise (page 8) described a reception for Acton's veterans of the war and listed those present.  In addition to names on the stone, the list included T. Marion.  Alec Losaw was present at the reception but was said to be from Boxboro.

Acton Historical Society also owns pictures of the memorial on its former site on Acton Common.  [See for example PH 97_23B_1 & B_3.]