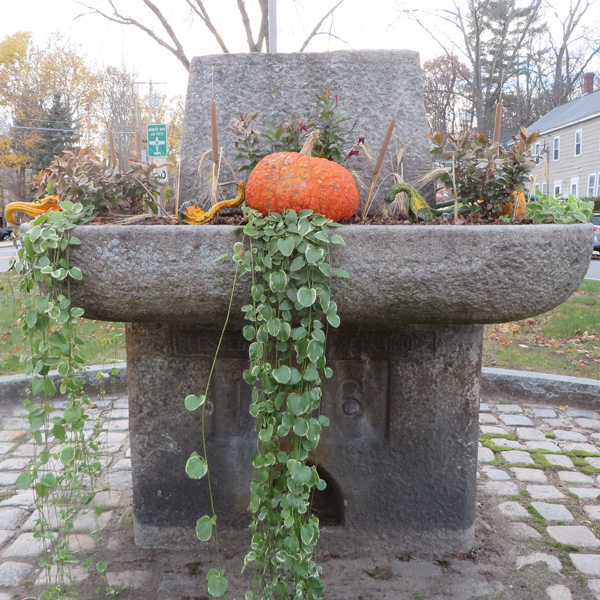 The base of the watering trough says:
BLESSED ARE THE MERCIFUL
1906

At the annual town meeting, March 27, 1905, the town voted to instruct the selectmen to supply "a public watering trough for the West village."  In the preceding year, the town had received a donation of $20 from the Society for Prevention of Cruelty to Animals to aid in establishing a water trough; presumably it was used for West Acton, as that was the only trough installed around that time.  The Selectmen's Report for the year ending March 10, 1906 shows the following expenses for a Special Well, West Acton:

The following year, D. C. Harris was paid $6.00 for lettering a trough, presumably the one in West Acton.  A postcard in the Society's collection shows the watering trough as it was between 1906 and 1914, a rectangular stone trough dated 1906, facing Massachusetts Avenue at the corner of Central Street.

The Concord Enterprise, June 19, 1914, West Acton news (page 10), reported: "D. C. Harris and son Arthur of North Acton did a good piece of work here Monday on the public watering trough, which was made larger.  Before the trough could not hold enough water for the many horses on the milk teams, who gather here in the morning.  The trough, which is in Central sq. is a great convenience to all concerned."

A 1927 article from an unspecified newspaper in a scrapbook in the Society's collection, ("Women of West Acton Have Cleaned Up That Village"), discussed changes to the Square at the center of West Acton.  A house was moved to improve sight-lines, and the watering trough was moved away from the corner, allowing more room on Massachusetts Avenue.  The 1927 Town Report confirms the move.