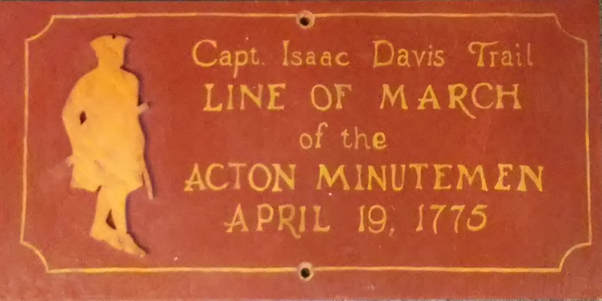 In 1957, Acton's Boys Scouts began a tradition of retracing the route by which the Acton Minutemen reached the North Bridge in Concord on April 19, 1775.  This Line of March became known as the "Captain Isaac Davis Trail."  In 1960, the Captain Isaac Davis chapter of the Daughters of the American Revolution designed signs to mark the route with input from local Boy Scout leaders.  According to the town report of 1962, the wooden Line of March markers were dedicated in April 1962.  They were a community effort.  Materials were donated by the family of Leo Cunningham, the cutting and painting were done by the high school's Industrial Arts department, and Mrs. Edward Noyes did the lettering and "final design."  John Loring, Chair of the Planning Board at the time, chose the sites, and the members of Boy Scout Troops 1, 2 and 284 erected the markers.

There was undoubtedly concern about how long the signs would last.  In 1975, they were replaced by granite markers.  What happened to the wood signs is unknown, but in late 2017, the Acton Historical Society received a donation of a remarkably well-preserved wooden marker, pictured above.