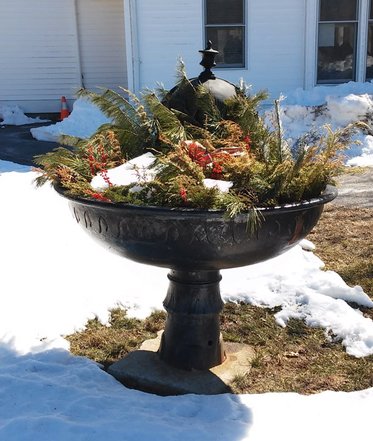 In 1913, a new iron watering trough (referred to as a fountain) was installed in Exchange Square, South Acton.  It was considered an aesthetic improvement over the 1896 stone trough.  Originally, the iron fountain had signs pointing out the way to other towns and cities and was topped by a globe light.  The white globe was removed in 1917 because of fears that it would break from the jarring caused by wagon tongues hitting the metal water bowl when horses were brought to drink.

By 1930, the fountain was seen as a nuisance and a hazard, not only to drivers, but also to school children who congregated there in the morning while cars passed on all sides.  The fountain was removed in July, 1930.  In the process, it was discovered that its base had been damaged by collisions with poles of horse-drawn vehicles.  The fountain resided on private property on High Street in South Acton for many years and then was moved to its present location outside of the Recreation Department.

For further information see:
Concord Enterprise:Town Reports:Sullivan, Larry.  For the Accommodation of Man and Beast. (The Horse Troughs and Drinking Fountains of the Henry W. Clapp Co. and the Concord Foundry Co.).  Warner, NH: The Warner Historical Society, 2019.  See pages 72 and 73.