Soldiers and Sailors of the American Revolution Buried in Acton Cemeteries 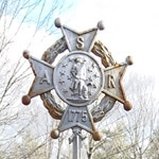 Many veterans of the Revolutionary War were buried in Acton's cemeteries.  Some graves were unmarked.  The Concord Enterprise of April 18, 1895 suggested that there might be more than "150 graves of revolutionary heroes scattered through the cemeteries of the town," but by that point in time, a number closer to 100 had been discovered.

The following list shows those whose graves were stated in at least one written source to have been honored with a Sons of the American Revolution marker.  Most were placed at graves in April 1895 as part of a large-scale celebration of the 120th anniversary of the Concord battle.  In some cases, the SAR markers must have been placed on unmarked graves (for example, Francis Barker and Joseph Brown's stones were installed after the 1895 SAR markers).  Furthermore, it is likely that some SAR markers have been moved or damaged in the years since the markers were placed.  In some cases, we have found gravestones for individuals with the names on this list, but they lack SAR markers. More research is needed to confirm that those gravestones actually belong to the Revolutionary veterans.  This list is under construction, so check back later for updates.

Other graves were found that were marked with SAR Markers in the cemetery, but they were not in the written listings consulted.  Further research should confirm Revolutionary Service:

1 Both SAR marker lists specify a first name as John.  No John Chaffin listed is in the 1896 Massachusetts Soldiers and Sailors in the War of the Revolution, but there is a Jonathan Chaffin of Acton listed.

2 John Cole's grave is listed in the April 18, 1895 listing as having been marked with an SAR marker, but the 1901 May book did not include John Cole in Acton's grave listing.